A Peace of My Mind: Investigating the Peace Symbol

LYRIC O’ THE DAY:
I am looking for someone who can take as much as I give
Give back as much as I need
And still have the will to live
--Blood and Fire, The Indigo Girls
December is here and I find myself feeling sort of introspective, trying to look back at the year and decide what direction to head in the new.  I guess I’m searching for inner validation, the big tattoo of a peace sign on my soul.
But would that mean what I thought it did?  Or would I be like those poser chicks (here’s looking at you, Britney) who get Chinese letters inked on, only to realize later they now have a recipe for egg drop soup on their shoulder?
This Sunday’s mythbusters focuses on that ubiquitous circle of hippie code, the peace sign. 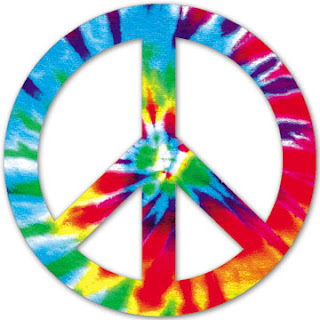 Artist Gerald Holtom is credited with designing the peace symbol as we know it for Britain’s pacifist organization against nuclear war, the Direct Action Committee.  It was first publicly displayed in the Aldermaston peace marches of 1958.  Holtom said to Hugh Brock, editor of Peace News, that he was in “deep despair” when he created it and took inspiration from Goya’s depiction of a peasant in front of a firing squad.
Finding resistance in using depictions of the cross as part of his design, he decided to use downcast “arms”, taking a cue from semaphore code.  Supposedly, he combined the letters N and D into a unified structure to represent Nuclear Disarmament.

Later in his life, Holtom expressed regret to Ken Kolsbun in his book “Peace: the Biography of a Symbol” that he did not stick with his original idea of upwardly cast “arms” given the negative connotations with the downcast model.
What negative connotations, you ask?  Some claim the origins of the peace sign were anything but peaceful, most citing its ancient links to paganism.  Indeed, the upright symbol resembles a Norse rune and some refer to it as “the Druid’s foot”.  The rune Algiz, aka the “elk” rune, is a protection rune symbolizing spirituality and the divine might of the universe.  Many anti-peace sign writers claim it is a “rune of death”, but most pagan scholars believe that in the reverse it simply means lack of protection or no connection with inner spirituality.
The peace sign became an anti-Christian symbol in the first century A.D.  The Roman emperor Nero is historically known for his early persecution of Christians.  Some scholars attribute the execution of the Apostle Peter to him as well.  Peter was crucified upside down.  There are two possible reasons why--some literature claims he requested this as a symbol of his unworthiness when compared to Christ.  In the Catholic church, many still view the upside down cross as a symbol of humility.  However, others believed this was Nero’s attempt to denigrate Christianity.  Nero’s cross, aka “the broken Jew,” is still seen by many as a symbol of the “anti-Christ”.  Anton Levey, founder of the Church of Satan, supposedly uses the symbol as a backdrop for his altar.  Black metal and pop culture also encourage the Satanic implications of the symbol as an upside down cross/crucifixion.

The anti-Christianity tag stuck with the sign during the early A.D. centuries.  The Saracens, a group of desert warriors living in ancient Arabia, reportedly used a similar image on their shields. This group has been described originally as pagan or polytheistic, but towards the 1000s became synonymous with Islam (Wikipedia). This “broken cross” symbolized their refusal to accept Christianity.
German calligrapher Rudolph Koch proposed a different meaning for the symbol.  In his “The Book of Signs” from 1930, the inner “witch’s foot” represents the death of man, while the outside circle is eternal life or the unborn child.  Some scholars argue this is simply a depiction of a pagan circle of life.  However, the Nazi's use of the symbol in their 3rd Panzer Division from 1941-1944 and on the graves of some SS soldiers led some to believe it represented the eternal destruction of mankind.
Rumor says the peace sign made its way to America in 1960 with Philip Altbach, a leading member of the Student Peace Union based at the University of Chicago.  This nationwide student organization expressed pacifist and humanitarian sentiments.  Much of their focus was on anti-nuclear protests and the peace sign eventually made its way across the country.  The ideas of pacifism and anti-war were often interpreted as cowardly--leading some to dub the peace sign "the footprint of the American chicken."  In cold war conspiracy theory, some claim that the Soviets were behind the proliferation of the symbol in an effort to cause political and social clashes.  The theories of Communism were seen by many as anti-Christian, and thus equated with the symbol. 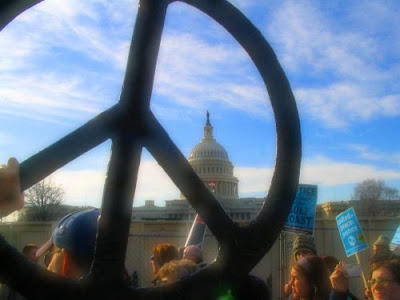 Nowadays you can go into any department store in the U.S. and find articles emblazened with the peace sign, but I doubt most consumers know about its history.  When you see someone wearing a peace sign, I think for most it is an attempt to convey love and hope for a better tomorrow.  At least that’s what it is for me. 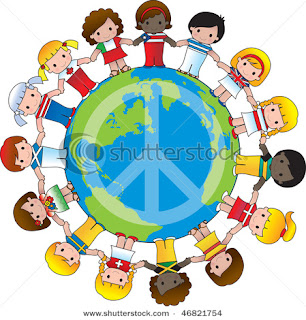 Peace to you all.  Don’t forget about Alex J. Cavanaugh’s Insecure Writer’s Support Group coming up Wednesday.
Posted by julie fedderson at 10:27 AM