LYRIC O' THE DAY:
I've felt the hate rise up in me
Kneel down and clear the stone of leaves
I wander out where you can't see
Inside my shell I wait and bleed
--Wait and Bleed, Slipknot


Have you ever wanted a do-over?  A chance to just step away from the cakes that say "Eat Me". . . or perhaps you would take an even bigger bite.  I wrestle with the do-over desire daily, although the things I end up wanting to do-over most are the things I didn't do.  And that sucks doo-doo.


The quirky quantum quartet of Creepy Query Girl, Nicole Ducleroir, Lydia Kang and DL Hammons have given me the chance to have a do over--at least with a blog post.  The Deja Vu Blogfest is a chance to dig out a dusty post, slap a new dress on it and call it shiny and improved.  Sort of like turkey leftovers.  Or Joan Rivers.  That being said, when I was looking through my posts, I didn't really think there was anything so earth shattering that it needed to be replicated.  So I chose something near and dear to my romance writer's heart.  Because if anything is worth repeating, it's got to be some hot sex cliches. 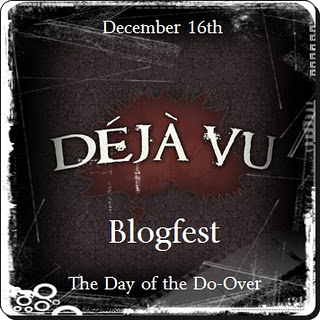