LYRIC O' THE DAY:
We’re covered by the sacred fire
When you cut me, you cut me to the bone
--Lorelei, The Cocteau Twins
I have to thank a completely random conversation with Lydia Kang about the movie Mermaids and feeding children with appetizers for today's inspiration on Sunday Mythbusters.


Thanks to the power of Disney, most people picture a perky redhead when they think of mermaids. 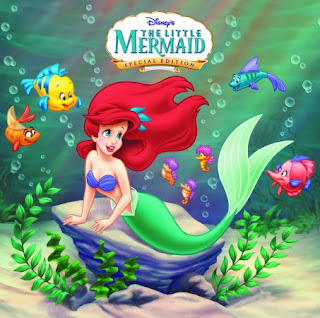 However, these mythical creatures of the sea were around way before the advent of cartoon sexuality thinly veiled as family-friendly cinema.  In contrast to Ariel’s innocent ingenue, mermaids were seldom considered a good omen--in fact, sightings often meant bad weather or worse.  Sailors enchanted by mermaid's songs followed them to a watery death, drowned by a vixen turned vicious.  And what of those who did find love with a mermaid?
“A mermaid found a swimming lad,
Picked him for her own.
Pressed her body to his body.
Laughed and plunging down
Forgot in cruel happiness
That even lovers drown.”
--W.B. Yeats
Mermaids traditionally have been seen as half man, half fish.  However, merfolk encompass all creatures from the sea that shapeshift to human form.  Nearly every culture has a type of mermaid:  selkies, melusines, roanes, rusalkas, undines, loreleis and nixies to name a few.
The first mermaids represented sea gods.  The Babylonians worshipped a sea god named Ea--the earliest version of Neptune.  Atargatis was a Syrian goddess who banished herself to the sea because she was so distraught over getting knocked up by her mortal lover.
No word on how he took it.
Atargatis eventually adapted to pregnancy and became known as Derketo to the Greeks (and to Robert E. Howard’s Conan).  In Greek myth she is sometimes confused with Aphrodite.  Even today there are mermaid deities.  In Africa, a fertility goddess named Mami Wata heals the sick but will drown those who dare disobey her.  In the Caribbean and Haiti, La Siren is worshipped in the Vodou religion.  And in America, we have Cher. 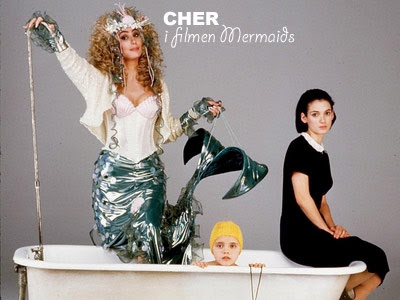 Not all mermaid legends came from such lofty ancestors.  The Roman poet Ovid claimed mermaids formed from the burning wood of Trojan ships during the Trojan war.  Indeed, mermaids are mentioned by Homer in the Odyssey as attempting to lure Ulysses away from his ship as he sailed home from Troy.  Irish mermaids are reported to be the souls of old pagan women banished from the land by St. Patrick.  In China, mermaids are believed to be simple-minded water nymphs who bring happiness or sadness based on the color--and smell--of their tails.  Apparently a purple tail smells like happiness.  Red tail smells like sorrow.  Don’t ask what the brown tail smells like.
Slavic myths (always my favorite) tell the story of the rusalka, a mermaid demon who lives in lakes and waterways.  Generally the rusalka is a woman who has died a violent death before her time, often from suicide or at the hands of a lover.  During Rusalka days in June, they come out of the water and take to the trees to try to woo men to their deaths with song.  Antonin Dvorak wrote his opera, Rusalka, based on this folktale.
There have been numerous mermaid sightings throughout history.  Columbus in 1493 saw three mermaids in the area of the Dominican Republic.  According to his journal, he was quite dismayed that they weren’t at all beautiful--in fact, they looked manly in the face.  Most scholars now believe he saw a group of manatees.  In his memoirs, John Smith claimed to see mermaids by Massachusetts, although he also claimed to see blue men with square heads, Pocahontas, and cannibalistic women warriors who wanted him for sexual slavery.  Henry Hudson in 1608 sighted a mermaid with 2 other crew members.  They described it as half porpoise and half woman, skin spotted like a mackerel, and with large, "magnificent" breasts.  Which just goes to show you men love T&A, no matter what the species.  And if you need a more recent sighting, in 1998 in Kona, Hawaii, a team of divers following a school of dolphins photographed a real mermaid--the Weekly World News said so.  And on the next page they had a story about Hilary Clinton’s alien baby.
Perhaps those divers were actually vacationing at a Florida resort called Weeki Wachee, the City of the Mermaids.  In 1946, a former Navy Seal trainer got the idea to teach attractive young women to free dive using an air hose.  He took his plan one step further, and had them wear elaborate mermaid costumes.  Thanks to capitalism and post WWII sexual curiosity, Weeki Wachee became an aquarian Vegas and is still in existence.
With so many mermaid sightings, one would think a corporal mermaid would be discovered and studied.  The anatomy of the mermaid was first described around the fifth century A. D. in a text called the Physiologus, which was basically a listing of beasties of the day--like a medieval Encyclopedia Britannica.  There are a few descriptions of “mermaid autopsies,” but none have been verified.
P.T. Barnum is credited with bringing the mermaid to the masses in the 19th century with his sideshow exhibit called “The Feejee (Fiji) mermaid.”  However, he likely got the idea--or even the exhibit itself--from the son of an English captain who traded his ship and its contents for what was eventually revealed to be a monkey’s torso sewn to the body of a fish.  Versions of the Feejee mermaid have been seen even in Renaissance times, well before P.T. Barnum saw an opportunity to profit in the era of Darwinism during the 1860s.  Unfortunately for Barnum, this oddity was not at all popular in America--and even caused riots when folks expected a half naked Daryl Hannah and got a wrinkled piece of taxidermy.  On a tangential note, a Feejee mermaid was a murder suspect in an X-files episode.  The killings eventually were found to be done by a parasitic twin.  I really miss the X-files.
The most recent merfolk hoaxes occurred after the devastation of the December 2004 Indian Ocean tsunami.  The following video depicts a "real" mermaid that washed up on a shore after the storm.
Some mermaid myth is likely based on a congenital defect that occurs in 1 of approximately 90,000 births known as sirenomelia, in which an infant is born with its legs fused together.  Generally, this is a fatal malformation due to kidney and urinary tract abnormalities.  Currently there are only two people in the world known to be living with sirenomelia according to Wikipedia.  A Peruvian child named Milagros Cerron received worldwide attention when she underwent a series of operations to separate her legs in 2005.
Most scholars now attribute the historical sightings of mermaids to the the animal group Sirenia, which includes manatees, dugongs, and the extinct Steller's sea cow.  However, the sounds that a manatee makes are generally high pitched squeaks, whistles and clicking noises, not easy to be confused with the haunting and beautiful melodies associated with mermaids.  We may never know what sailors were really seeing on those lonely nights at sea.
Mermaids will always hold a soft spot in my heart--I'm an Aquarius after all.  The idea of a creature crawling on the shore to form legs and walk may be more fact than fiction depending on your beliefs.
There are some amazing paranormal novels dealing with merfolk--they are enjoying "new shiny thing" status in fiction currently.  It seems fitting that one of the most popular icons of the 21st century represents the sailor’s muse--and perhaps the writer’s as well.

Posted by julie fedderson at 12:15 AM