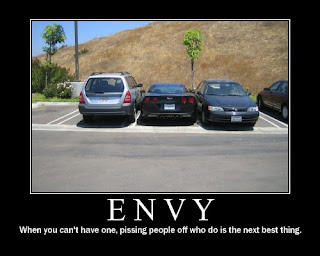 Envy is associated with the evil eye, aka the matiasma, malocchio, or mal de ojo.  The evil eye is the belief that the act of envy can transmit bad luck, illness, or in some cultures, impotence.
Something as simple as a compliment gets the eyeball rolling.  Although the name evil eye implies a victim being cursed, the true meaning is closer to coveting, and generally is done without ill will.
The concept probably started in ancient Greece and later passed to ancient Rome.
Most strong believers are in the Middle East, central America and Mediterranean Europe, but more than one third of the world’s cultures believe in the evil eye.

A Berkeley professor by the name of Alan Dundes has a unique theory about the origins of the evil eye folklore.  He links it to water and its importance in the more arid regions in the world.  He cited that the afflictions blamed on the evil eye included babies vomiting and becoming dehydrated, breastfeeding mothers (or livestock) losing their milk, fruit withering on the tree, and impotency in men.  Basically, to give the evil eye is to cause another to "dry up."  Given dehydration and its effects were a serious threat in these areas, this could be a plausible etiology of the superstition.

The evil eye typically is not done with malicious intent, but some people may have the power to cast an evil eye--whether they want to or not.  In Southern Italy and Sicily they are called jettatores.  They are not necessarily evil people--just cursed with a terrible power.  How to tell if you’ve met up with a jettatore?  Although envy is commonly associated with a green eyed monster, those with blue eyes are reputed to be more likely to carry the affliction.  You should also avoid the more hirsuit--unibrows are a sign of a jettatore as well.
How do you avoid passing on the evil eye?  In some countries, it is customary to spit after giving a compliment, thereby removing the potential blight of the praise.  Others believe a true annointment of spit is needed--although this is probably better reserved for blood kin. 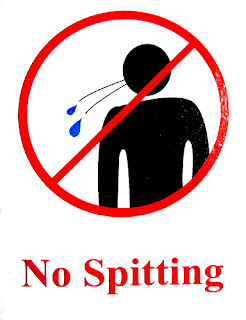 In cultures more wary about swapping spittle, you may just touch the person who you compliment to take away the focus of the evil eye.  And what if someone praises you and doesn’t follow these rules of evil eye engagement?  Some cultures have special prayers of protection.  If you aren't one for memorization, another method is to speak ill of yourself to negate the praise.  I always knew self deprecation had a purpose.
For those of you with a heavy metal side, Ronnie James Dio offers this simple hand gesture to aid in avoiding the evil eye.
The sign that Dio learned from his Italian grandmother (and now is flashed by legions of metalheads) is actually an ancient hand gesture called the mano cornuto, or “horned hand” in Italian.  Contrary to popular belief, the mano cornuto does not represent the horns of Satan--this is a more recent appropriation of the gesture.  The horned hand historically symbolized the horns of a virile animal, usually a bull.  Pagan religions used it to represent the male consort of the Earth mother goddess.  It's the hand gesture equivalent of showing off your manhood, no power tools or flexing necessary.  When used as an offensive gesture, it indicates to another man that he has been cuckolded.

Some anthropologists give the mano cornuto a more feminine view, believing it represents the sacred lady garden--i.e. the fallopian tubes and uterus.  (I have two friends who are anthropologists, and believe me, everything leads back to sexuality eventually.)  Their explanation for the use of the gesture to ward off the evil eye is simple:  when the thumb is inserted between the index and middle finger, it becomes a representation of the phallus nestled safely in the lady garden, unscathed by the hairy eyeball of emasculation.
What to do if despite all of your spitting and gesturing you have been evil eyed? First you may want to confirm your affliction.  The Greeks do this by performing a xematiasma in which olive oil is poured into a bowl of water while chanting prayers--if it forms an eye shape, the curse is confirmed.  If you are lacking oil, try rubbing an egg all over your body and then breaking it open--if the yolk looks like an eye, the deed has been done. 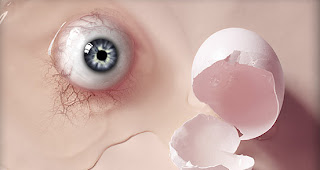 If you can find the person who is responsible, have them spit 3 mouthfuls of water into your mouth to lift the spell.  If that doesn't work, get their phone number and try dinner and a movie instead.  Taking another egg and rubbing it over your face and body, then burying it in a shaded place hidden from the sun is also a cure.
There are many talismans used to repel the evil eye.  The simplest (of Kabbalah and Madonna fame) is the single red string tied around a wrist. 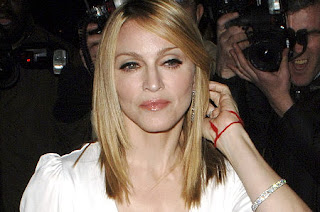 Others are amulets in the form of an eye, a hand, a horseshoe or some combination thereof.  By wearing an eye, you mirror back the evil eye, thus negating it.   A blue bead gives similar protection--possibly a crude representation of the blue eyed devil that is apt to give the evil eye. 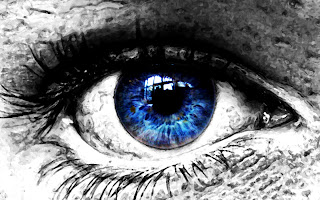 Again, some scholars cite sexuality as a link to the use of an eye-like symbol as a talisman.  The eye worn as protection symbolizes feminine power--aka the cervix.  In the male, an eye mimics the one eyed wonder worm looking right at you.


In India, cloth crocheted with tiny mirrors can be a way to avoid the eye.  The hand of Fatima is also a charm, often incorporating an eye within the palm to represent the reflective power of God's grace. 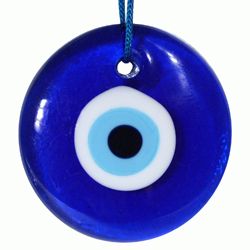 For men, a talisman in the shape of a horn, often cut from coral, may be worn to protect the family jewels.

Since the moon goddess is said to be the mentor of mothers and milk, any crescent shaped talisman will also do the trick.  In ancient Egypt, an amulet carved of red jasper called the Girdle of Isis was popular as a talisman against the evil eye.  When the anthropologists got involved, some postulated that this buckle shaped bauble was a representation of


the menstrual pad of Isis.


Menstrual blood was considered by many ancient cultures to be all powerful and representative of the possibility of creation of life.  Wearing a symbol of that blood was protective against threats to fertility and sustenance of life.  Interestingly enough, Isis was the mother of Horus, whose eye symbolizes luck, wealth and good health and is often used as a talisman to ward off the evil eye.  A modified version of the eye of Horus even graces U.S. currency. 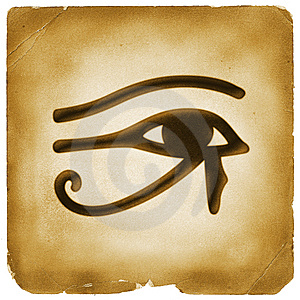 If you’re not a jewelry person, there are other ways to ward off the evil eye.  In Sicily, a lemon pierced with nine nails can be placed above the threshold, thus barring a jettatore from entering.  Snakeskin also neutralizes the power of the evil eye.  For those with more culinary leanings, a head of garlic with only one clove is often used by gypsies as a talisman. And as recently as the the early 20th century, it was customary to dress little boys as little girls in order to ward off the evil eye.
For men, even if you’ve been caught without a talisman, you’re in luck.  Just grabbing your anthropological source of power may be enough to thwart any malocchio.

Have a beautiful week!  Stay tuned for some disturbing factoids about myself courtesy of a plethora of taggings recently.  There will be nudity.  And maybe an anthropologist.
.
Posted by julie fedderson at 11:03 PM

Email ThisBlogThis!Share to TwitterShare to FacebookShare to Pinterest
Labels: anthropologists think about sex a lot, Dio, the evil eye