They're always after me Lucky Charms!

LYRIC O’ THE DAY:
It’s like thunder and lightning,
the way you love me is frightening.
You better knock, knock on wood, baby
--Knock on Wood, Amii Stewart.
Lucky charms, not including the pseudo-marshmallow goodness of the cereal variety, are objects culturally invested with magical properties.  People have described countless talismans as "lucky."  Many of those symbols have wound up in our every day lives.  Stars, keys, runes, medals, and crystals are part of our wardrobe and even are incorporated in the brands we buy.  One of the earliest ads for good luck jewelry ran in Art and Beauty magazine in 1926.


Today on Sunday mythbusters, I look at the history of a few of our good luck charms. 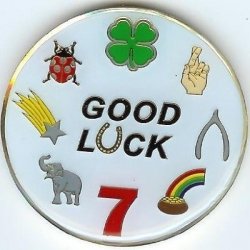 The Horseshoe
One of the most recognizable symbols of good luck is the horseshoe.  My house has one embedded in the corner of the entryway, in homage to the belief that a horseshoe placed at the right corner of the front door will bring all who enter good luck.  Some attribute this myth to Irish superstition that iron kept evil Fae away.  Others cite a story about St. Dunstan, who along with his more sacred talents was a skilled farrier.  The Devil approached St. Dunstan, presumably because he needed a little touch up in the hoof department.  St. Dunstan recognized the red one, hammering his hooves to the wall and filing like a demented manicurist until the Devil screamed for mercy.  St. Dunstan released him only when the Devil promised to avoid houses protected by a horseshoe over the door.  Lore says that the shoe should be points up, lest all that good luck spill out.
The Four-Leaf Clover
Veering back to the realm of the leprechaun, the four leaf clover has to be included in a discussion of good luck charms.  Legend says a four leaf clover was the only thing Eve was allowed to take with her from the Garden of Eden.  In Irish tradition, the three leaf clover is felt to be a representation of the Holy Trinity.  When the fourth leaf appears, it represents God’s grace.  A more secular view has the leaves symbolizing faith, hope, love, and luck.  To those who have pagan beliefs, the bearer of a four leaf clover is granted the ability to see spirits and fairies.
If you want the odds of picking out a naturally occurring good luck charm, for every 1 four-leafer, there are 10,000 three leafers.  However, researchers from the University of Georgia found the four-leaf gene in 2010, making it now possible for breeders to genetically engineer luck. 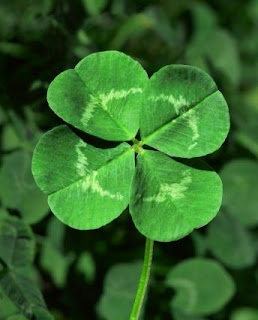 Knock on Wood
Humans often tempt fate, and one way to avoid the consequences is to knock on wood--or if you furnish with IKEA, wood veneer.  This goes back to the pagan belief that every living thing had a spiritual connection.  Knocking on wood paid tribute to the spirits and asked for their blessings.  In Greek mythology, knocking on an oak was a way to ask for the blessing and justice of Zeus as the tree was one of his symbols.  In a Biblical theory, wood symbolizes the cross on which Christ was crucified and is a show of faith.  Other claim the saying got its popularity during the Spanish Inquisition, when an elaborate code of knocks became a secret form of communication for those sought out by authorities.
The Hand of Fatima (or Miriam, or Mary)
The hand is often seen as good luck.  Egyptian civilization believed the hands received spiritual energy and could also direct it.  In Islam, the Hand of Fatima is a good luck charm, named for Muhammad's daughter.  The fingers represent faith, prayer, charity, pilgrimage, and fasting.  Judaism embraced this symbol as well, although it was called the hand of Miriam to honor Moses's sister.  Christians in the area also adopted the symbol as the hand of Mary, although Emperor Charles V banned the use of the emblem in 1526, believing it was too closely associated with other religions. 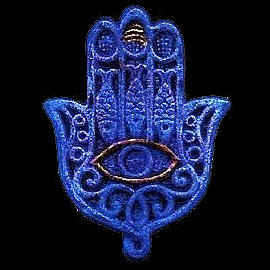 No matter what faith, the hand is a symbol of the grace of God, blessing the wearer with good fortune and protection against the evil eye.  Gypsies often would hold their hand up to a person with bad spiritual energy, shielding themselves from the negative vibes.
The Rabbit's Foot
My final charm is a little magical and a little macabre, which is probably why it is my favorite.  The rabbit’s foot has been a good luck charm since around 600 B.C.
There are possibly two origins for why a dismembering a bunny is considered lucky.  Pre-Celtic hunter tribes believed hunting and killing a rabbit was a rite of passage for their male children.  Once he achieved this milestone, the boy received the hind foot of his kill during a ceremony to celebrate his manhood.  The descendants of these hunter tribes saw the rabbit as a more revered creature.  To the Celts, rabbits and hares were animals capable of channeling the human spirit, and thus represented man’s connection to the Earth goddess.  They embodied fertility of both body and mind.  Rabbits may have been kept as pets, and their feet removed at death as a blessed talisman.
In an alternate theory, African tribes had a tradition of carrying the foot of a swift animal, believing it would help them escape if faced with danger.  The belief was brought overseas with African slaves, and then Hoodoo folk magic took it a bit further.  The rabbit became a familiar for witches and spirit work, much like the maligned black cat.  To own a rabbit's foot was to have a connection to witchcraft--and possibly to have part of the witch herself.


Isobel Gowdie, a Scottish woman tried for witchcraft in 1662, gave a detailed confession (which some believed was the result of psychosis) about the relationship of witches with animal familiars, specifically the hare.  This is her shapeshifting incantation, although I read it several times and I'm still human.  I am having a strange craving for carrots.
I shall go into a hare,
With sorrow and sych and meickle care;
And I shall go in the Devil's name,
Ay while I come home again.
If you can't find a shape shifted witch-hare to get your foot from, Hoodoo followers offer a different method, although it's a bit more time intensive.  To reap the full benefit of serendipity, the foot must be from the left hind leg of a rabbit caught in a cemetery on the full moon, preferably on a Friday--the thirteenth if possible.  Some folklore even goes as far as to say the rabbit should be killed with a silver bullet by a cross-eyed red haired man riding a white horse.  Somehow I doubt those dyed creations in the prize bins at your local carnival were harvested in such a manner. 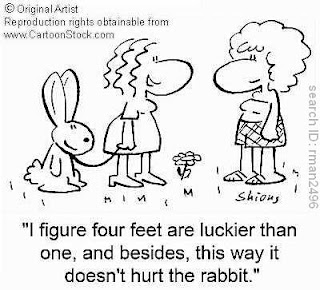 In folk magic, animal bones are often used to represent human bones.  This type of magic, called sympathetic magic, uses poppets and imitations of humans to control them--such as with voodoo dolls.  For the ultimate in rabbit foot fetishests, killing the rabbit on the grave of a powerful spirit would give the talisman incredible potency.  It was reported in Scientific American that President Grover Cleveland kept a rabbit’s foot from an animal killed on Jesse James’ grave.
I carry an arsenal of good luck charms, and some days I even don lucky undies.  However, I believe that luck is mainly determined by mindset.  What you think has a tremendous effect on your perceptions of life.  A mind full of negative thoughts enhances beliefs of being plagued by “bad” luck.  I leave you with a proverb from Seneca, the Roman philosopher, and a bit of The Rabbit's Foot Blues by Blind Lemon Jefferson.


Luck is what happens when preparation meets opportunity.
Posted by julie fedderson at 6:23 AM