LYRIC O’ THE DAY:
Heavenly wine and roses
Seem to whisper to me, when you smile
--Sweet Jane, The Velvet Underground
It was a dark and stormy night.
Ok, not really, but I like to embellish.  I was in seventh grade, one of the fortunate few who was invited to Stacy Smith’s** birthday party.  It was a night of many firsts for me and my burgeoning adolescence.  I experienced my first kiss, a Lady and the Tramp moment thanks to Truth or Dare, the class boy slut, and the vegetable plate Stacy’s mom provided as party food.  As an unfortunate result, “celery” was my nickname well into junior high.
**names have been changed to protect the innocent
However, the most eventful part of the night was not Frenching with Veggies 101, but playing with a Ouija board for the very first time.  I still remember that musty smell as it slipped out of the cardboard box--like a crypt had been broken open.  Some of the girls were scared to even touch the thing; the guys were fighting over who got to ask it when they would get laid for the first time.  I don’t remember what else we asked it; I’m assuming maybe deep existential questions like why was New Coke necessary or other stuff that was important in 1985.  But before we could get into the nitty gritty of our futures, Stacy freaked out, too panicked to continue.  Mr. Ouija is probably still locked in the hallway closet of the Smith home, waiting to be the gateway board game into harder things, like Dungeons and Dragons. 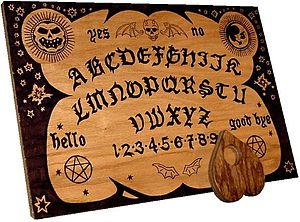