Terror on the Toilet

LYRIC O’ THE DAY:
What happened to the girl I used to know?
You let your mind out somewhere down the road.
--Don’t bring me down, The Electric Light Orchestra
I just returned from a refreshing week of vacation.  I saw 11 states and a myriad of bathrooms ranging from the good, to the bad, to one that made my five year-old son break down in tears.
My quadriceps still ache from hovering over toilet seats that I found less than inviting to my lily-white loins.
So this week for Sunday myth busting, I veer from folklore myth to urban legend.  Because before I invest in this device, I have to know:
Can you really get a disease from a toilet seat?
First of all, a toilet seat, or any other hard and non-living object, is an inhospitable environment for most organisms, viral and bacterial.  If dry, most organisms will die within minutes of being left without their host.  Even the very contagious parasitic diseases like crabs or scabies will die within 24 hours and are unable to adhere to the smooth surface.  An added bonus is that they are visible to the naked eye.
But what about the wet toilet seat?  I guess the follow up question is “wet with what?”  Urine is actually a sterile fluid.  But in other liquid suspensions, theoretically, things could live a little longer.  One study showed that gonorrhea in secretions lived for 2 hours on a toilet seat.  Herpes virus for four.
Ew.
But before you place an order for the Sanicone, let’s talk about the joy of skin. Unbroken human skin is a remarkable defense against germs.  Even if you touched a herpes blister directly, the likelihood of transmission would be nil without a break in your skin.  So sitting on a toilet seat, even a wet one, may make you nauseated, but won’t leave you with lasting illness.  But what if it was blood on the seat?  Well, I would hope most would back away from a toilet seat covered in blood but in the heat of the moment, things happen.  However, the CDC in its brochure on blood exposure relates that there is no known risk for Hepatitis B, Hepatitis C, or HIV transmission from blood exposures to intact skin.
In fact, there are very few proven case reports of STDs transmitted via toilet seat--none for herpes, HPV (the virus that causes genital warts) or HIV.  Two case reports of possible toilet transmission of gonorrhea have been documented--one in 1939 from two patients in a hospital sharing the same urinal (one was infected) and another of an 8 year-old girl using an airplane toilet.  She wiped visible purulent fluid from the seat and then cleaned herself with the same hand.  Which is an epic fail of Bathroom 101.
In 1979, two researchers published a study in the New England Journal of Medicine called The Gonoccocus and the Toilet Seat.  Sort of like The Princess and The Pea, only a totally different sort of mattress problem.  The study authors found that as soon as the organism dried out, it was dead.  But what about that two hours that it took to dry?  That is what is called theoretical risk.  This is where laws of transmissability of disease come into play.  In order to spread disease, two basic things are necessary:
#1 Enough germs to spread the disease (i.e. the inoculum)
#2  A way to get into the genitourinary system, the bloodstream, or other orifice.
This NEJM study is a perfect example of #1.  The authors took cultures from 72 public restrooms and found no gonorrhea present.  Moreover, 38 attempts to culture a toilet in a venereal disease clinic also revealed no STDs.  The study authors concluded that the toilet seat was not a viable mode of transmission, largely due to lack of a significant inoculum.
To address #2, the basic use of a toilet seat comes into play.  In other words, the areas that carry contagion are not necessarily those areas in direct contact with the seat.  I don’t know how you use the toilet, but I try not to rub my naughty bits all over in wild abandon on an unfamiliar toilet seat.  Assuming that your skin is intact where it is in contact with the seat, there is very little possibility of disease transmission.
Even Dr. Abigail Salyers, the former president of the American Society for Microbiology has said, “To my knowledge, no one has ever acquired an STD on the toilet seat -- unless they were having sex on the toilet seat!”  To which I issue a desperate plea to the masses (and pop music icons): 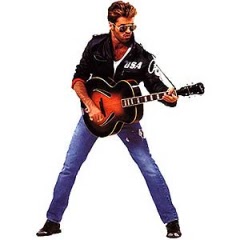 Those scenes in J.R. Ward’s novels are fiction.  Sex in a public bathroom is NOT hot.
What’s more likely to get you in a public bathroom are diseases spread by your hands--influenza, streptococcus, staphylococcus, bacteria that cause diarrhea, and hepatitis A.  But these things are far more likely to show up on the counters, faucets, and door handles. Microbiologists have found that steering wheels have 100 times as many bacteria per square centimeter than a toilet seat does.  Still, I guess if you touched the toilet seat, then ate a bag of Cheetos (you have to lick your fingers with those things), badness could happen.  But if your immune system is healthy and you employ simple hand washing, the likelihood of transmission is minimal.
And what about those toilet seat covers?  Peace of mind only.  And useless if the toilet seat is wet.  Which is why the Maine legislature refused to make toilet seat covers mandatory in public restrooms in 2009.
My next road trip I will plop down free of worry.  You, too, can rest assured that you won’t contract a disease from a toilet seat.  However, snakes in a toilet bowl are a completely different story. 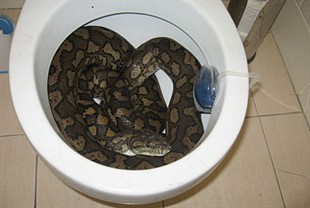 Carpet python found in a Townsville, AUS toilet.
Always check the bowl.
Posted by julie fedderson at 12:45 AM