LYRIC O’ THE DAY:
Gimme head with hair
Long beautiful hair
Shining, gleaming, streaming, flaxen, waxen
--Hair, The musical Hair
I hacked off my crowning glory this week.  I gave 13” of hair to Locks of Love, a charity I have always admired.
When I look at myself in the mirror now, I feel sort of odd.  I have identified myself with long hair for years.  I’m having a existential crisis of Sampson proportions.
Today on Sunday Mythbusters, I’m exploring this protein based biomaterial that springs from the follicles on my head.
Does hair really have power?
Long hair has always been associated with strength and health.  This may harken back to our mammalian roots--long, lush fur represented fertility and desirable genes.
The earliest civilizations depicted their gods and goddesses with long, flowing hair.  Hair represented a spiritual conduit that could connect a person to the otherworld.  The earliest barbers were often medicine men or priests who cut hair during religious ceremonies that exploited this connection.


In several religions, including Sampson’s, letting hair grow was an example of piety and godly devotion.  Long hair was the epitome of youth and fertility.  In some East Asian cultures it represented sexuality; women with unrestrained long hair could be seen as promiscuous.  Proper ladies wore their hair plaited or in a bun.
Because it was considered a personification of self, hair was often used as a way to recognize groups of people.  For instance, the Greeks forced their slaves to shave their heads as a sign of their lesser status.  In the Middle Ages, shorter hair represented servitude or peasantry.  However, as societies adopted a regimented military, problems with lice infestations prompted orders for men to have short hair.  That association with authority changed the view on short hair, making long hair the new symbol of rebellion and immorality. 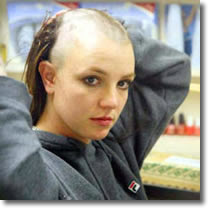 The Egyptians were the first culture to focus on hair and its style.  They often wore hair extensions made of sheep’s wool or slave’s hair.  They used henna and herbal concoctions to create vibrant hair colors.  To evade the heat, men often would shave the head, leaving a single side lock to symbolize their virility and spiritual connection to the gods.  Both sexes wore elaborate wigs.


The Greeks experimented with highlights and designed the first heated curling iron, called a calamistrum.  They even dyed gray hair with a lead sulfite based compound, a process that may have made them look younger, but likely caused death sooner.
Hair color has been romanticized for centuries.  There are over 30 recognized naturally occuring hair colors by the Fisher-Saller anthropologic scale.  For the sake of brevity, I'm going to address the three main color groups: red hair, blondes, and brunettes. 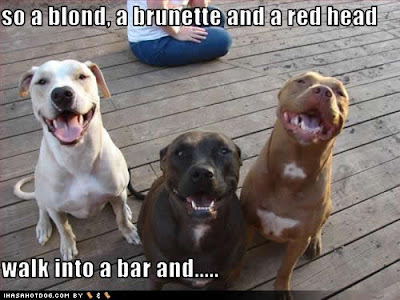 Redheads make up only 1-2% of the human population and have been traced to Neanderthal ancestors.  Scotland and Ireland have the highest proportions of redheads, who are famous for passions that match their fiery locks.  They were also often accused of witchcraft or vampirism, their flame colored locks "proof" they had touched the fires of hell.  Interestingly, redheads are reported to have a higher pain tolerance, often requiring more anesthetic for medical procedures.  It is rumored to be good luck to touch red hair--but always ask permission to avoid some awkward moments.  The cartoon comedy Southpark attacked the ginger species in one of its episodes, comparing them to vampires that can't be in the sunlight and have no souls.


It's postulated that lighter colors of hair evolved in the cooler climates of Northeast Europe and the Ukraine.  Lighter hair, and thus lighter skin, requires less sunlight to trigger vitamin D production--necessary to prevent the bone disorder, rickets.  Folks with light hair would have a genetic advantage.  Others believe that these colors were sexually selected for--men preferred partners with blonde or red hair.

Out of the ash

I rise with my red hair

Mythology has been kind to the blonde; countless numbers of gods and goddesses have blonde hair.  The Fae are said to be attracted to blonde children, swapping them for changelings whenever possible.  The fair haired, despite their ancestry from Norse tribes and descriptions in mythology, are classically associated with attributes of frivolity and mental weakness.  Blonde hair was also associated with prostitution in ancient Rome. The idea of the morally irresponsible blonde continued through the ages.  The woman who holds the title as the first “dumb blonde” was a French courtesan named Rosalie Duthe whose life was satirized in a 1775 play.

Alfred Hitchcock made his blondes beautiful and sophisticated with an icy demeanor.  He believed audiences were more likely to suspect a brunette, and blondes photographed better in black and white.  In interviews with Francois Truffaut, Hitchcock explained his idea of what represented the Hitchcock blonde, saying "We're after the drawing room type, the real ladies who become whores once they're in the bedroom."
Ahem.  Thank you for the stereotype, Mr. Hitchcock.  And Mr. Freud.
Brunettes fair pretty well in terms of hair lore--they are considered strong, loyal and lucky.  Black hair is sometimes lumped into the brunette moniker but truly is its own group, representing the most common hair color in the world.  Over 3/4 of Americans believe the first female president will have dark hair, associating it with stability and competence.  And according to my best dark haired friend, gentlemen may prefer blondes, but they marry brunettes.  Maybe that's why the Mona Lisa is really smiling. 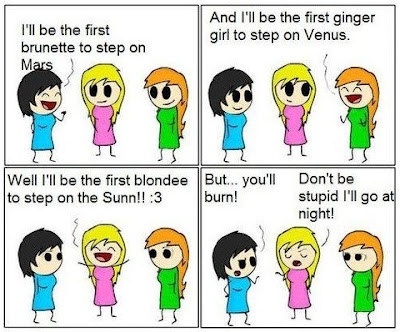 One of my favorite urban legends gives coiffure compulsion an arachnophobic twist. There are two versions to the modern myth.  One was popularized in the 1950s with the emergence of beehive hairdos.
The other focuses on men with dreadlocks.
In the myth, the victim is so enamored with their hair that in order to keep the style just so, they never wash or comb it.  The resultant pile of goo and hair makes an attractive nest for a poisonous spider, who moves in and lays its eggs.  When the baby spiders are born, they attack the owner of their nest. 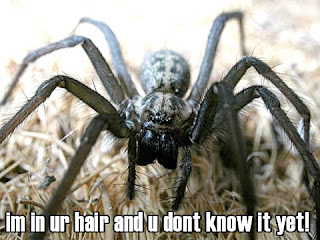 There are variants of this tale dating back as far as the thirteenth century.  It probably gets its roots from an English story that tells the tale of a tardy church-goer, always late to Mass because she spent so long adorning her hair.  One day the Devil, in the form of a spider, descended into her hair and refused to leave.  Ultimately, she repented her vanity, allowing her priest to exorcise Beelzebub from her bouffant.
Now that’s a bad hair day.
Although there have been no substantiated proof of the spider’s nest myth, in Yemen in 2000 there were reports of a young bride who died after her wedding hairpiece came with an added adornment--a scorpion.  The poisonous gift was from one of her new husband's five wives who apparently wasn't in the mood to share.
Hair has been something people have used as a symbol since ancient times.  Followers of Confucius grew it out to show their filial piety.  Flappers bobbed their hair to push the idea of the feminine ideal.  Hippies liked it long to symbolize their rebellion against authority.  And rednecks rock the mullet as a symbol of what can happen when Billy Ray Cyrus is your icon. 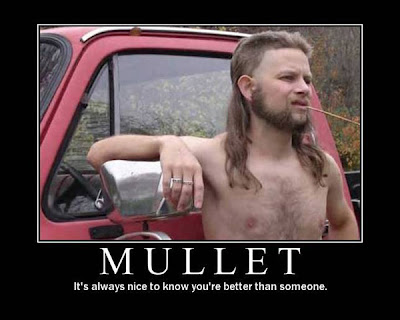 As for me, I’m starting to get used to the new ‘do.  If anyone is getting a haircut in the future, I leave you with a European saying and a clip from Hair, the musical:
Cut on Monday to attain health
Cut on Tuesday to gain wealth
Cut on Wednesday to hear good news
Cut on Thursday to get new shoes
Cut on Friday if you want sorrow
Cut on Saturday to see true love tomorrow
Cut on Sunday is terribly bleak--the devil be with you the rest of the week
Posted by julie fedderson at 6:56 AM