LYRIC O’ THE DAY:
No dawn, no day.  I’m always in this twilight.
--Cosmic Love, Florence and the Machine
Thirteen.  The age when you are officially a teenager--and boys can have a Bar Mitzvah.  Perhaps that transition to adulthood explains why the number inspires fear.  If you’re in the mood for a tongue twister, there’s even a name for it:  triskaidekaphobia.  Not linguistically laborious enough for you?  How about paraskevidekatriaphobia?  That’s the fear of Friday the 13th, and according to a Gallup poll from 1990, 9% of us have the diagnosis.
Why does this number incite such apprehension?

In the earliest cultures, thirteen actually represented a lucky number.
Prehistoric goddess worshippers used the number thirteen to represent femininity.  The Earth Mother of Laussel, a 27,000-year-old limestone carving, depicts a female figure holding a crescent-shaped horn with thirteen notches.  It has been asserted that these marks represent the number of “moon cycles”, i.e. menstrual cycles, in a year.  If you’re a math type, that’s 28 days X 13 months = 364 days.
The true lunar calendar, however, only has a 13th month in certain years given subtle alterations of the moon’s cycle.  Still, there are those who believe the thirteen month calendar is the most suitable for timekeeping.  In his book Campaign for the New Time, Dr. Jose Arguelles, a New Age spiritualist who founded the Planet Art Network and the Foundation for the Law of Time, supported the use of a thirteen month calendar:
"If we choose the 13 Moon Calendar, the species will operate by a 28-day cycle which is the female biological cycle. . .We will find that this tool synchronizes the lunar and other world calendars according to a mathematical harmony previously unknown. . . A new synchronic order of human life will unify the planet.”
I’m not sure if world peace will occur, but at least we may get holidays for PMS. 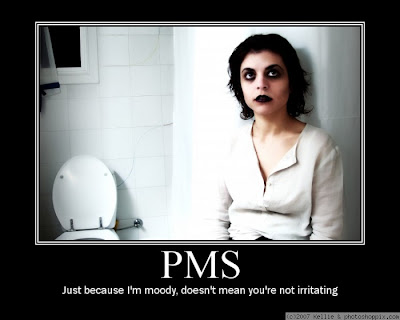 The goddess worshippers were not alone in their homage to thirteen.  To the ancient Egyptians, thirteen was a stage of spiritual ascension--twelve stages occurred during life, and the 13th represented the afterlife.
In Judaism, God has thirteen attributes of mercy, reminding his followers that repentance is always possible.  The Magi even visited Jesus on his thirteenth day of life.
So how did thirteen meet its run of bad luck?
Some believe that as cultures turned more patriarchal and less pagan, the idea of following a cycle based on the female biological system and the moon was not as desirable as one based on the more "masculine" solar year.  Others think that people misinterpreted thirteen’s role in the afterlife to mean the concrete idea of death.  This confusion can also be applied to the tarot, in which the thirteenth card represents Death as well--but typically not in physical terms. 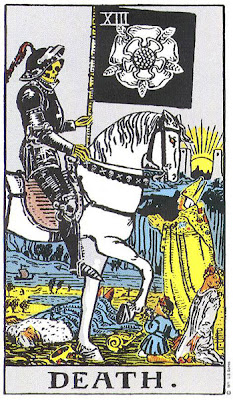 Covens of witches were said to have thirteen members, reflecting goddess and moon worship.  As fear of the occult and pagan religions spread during the 14th and 15th centuries, ideas about the bad mojo of thirteen did, too.
Lest you think fear of thirteen reflects fear of women and witchcraft, some claim the execution of the Knights Templar by King Phillip IV of France on October 13, 1307 marked the number as evil--oh, and BTW, it was a Friday, too.
Norse myth connects the fear to a banquet at Valhalla celebrating the invulnerability of one of their favorite sons, Baldur, God of Light and Joy.  Loki, God of Mischief, took offense at not being invited.  He crashed the party as the 13th guest and then tricked Baldur’s brother Hod, the blind God of Darkness, to attack Baldur with a piece of mistletoe--the one thing that could kill him.  Baldur died and with that, the world started its plunge towards Ragnarok, the great battle of the Gods and destruction of earth as we know it.
Similar to the Norse myth is the Christian belief linking thirteen to the Last Supper, where Jesus supposedly sat in the 13th seat and Judas, his betrayer, was the 13th and final guest.  In fact, the French are so opposed to having a 13 person dinner party that you can hire a quatorzieme, a fourteenth guest, from an agency to attend for a more aethestically pleasing soiree.
Contractors often avoid putting a thirteenth floor in buildings (or at least labeling it thirteen).  An internal review by Otis Elevators showed that up to 85% of buildings that utilize their elevators do not have a thirteenth floor.  It’s often renamed as a subfloor, or skipped entirely.  Hospitals often do not have a thirteenth operating suite or a thirteenth floor, believing it spares patients with thirteen phobia undue stress.  Fiction has a heyday with the idea of a hidden thirteenth floor where something sinister occurs--there was a 1999 film by that name, and reference to a thirteenth floor in Douglas Adams’ Hitchhiker’s Guide to the Galaxy.
Other infamous thirteens include the ill-fated moon mission of Apollo 13 in 1970.  It launched at 1313 hours and the oxygen tank explosion occurred on April 13th.  If you want statistics, a study published in the British Medical Journal in 1993 compared traffic volume and accidents on two different days--Friday the 6th and Friday the 13th.  It showed that although volume was significantly less on the 13th, there were still more accidents on that unlucky day.
So if you weren’t triskaidekaphobic already, all of this may have you thinking twice before putting a downpayment on that house on 1313 Mockingbird Lane.  But before you get too down on the number 13, remember this--there were thirteen original American colonies and thirteen people signed the Declaration of Independence. There are thirteen stripes on the American flag.

Moreover, if you pull a dollar bill out of your pocket, look at how many stairs there are on the pyramid.  How many leaves on the olive branch the eagle is holding.  How many stars are above the eagle, and how many arrows it holds.  Some go as far as to point out there are thirteen letters in E Pluribus Unum.  So, maybe thirteen isn’t all bad--unless money really is the root of all evil.

Have a wonderful Sunday.  And a special shout out to my friend Lydia Kang who landed a publishing deal this week with her awesome YA novel.  I can't wait to see it on the shelves!


Also, if I'm not following your blog but you're following me, let me know.  I like to know who's out there and keep in touch.  That is assuming you want me to find your blog.  If not, then never mind.
Posted by julie fedderson at 6:21 AM