LYRIC O’ THE DAY:
Will you be my, be my beloved?
Will you help, help me to get through?
Will you be my, be my destruction?
Will you help, help me to be through?
--Ever and A Day, A.F.I.
I’m feeling a bit sentimental, so this Sunday’s Mythbusters is going to veer into the realm of symbolism and folklore, another of my favorite topics.  You see, the Hubs and I celebrated 9 years together, and as I looked at the band of gold on my hand, I just had to wonder . . . is there magic in this ring on my finger?
Rings have been symbols imbued with significance and power since ancient times, although their meanings have not always been what Tiffany & Co. would have you believe.
The ring is viewed as a symbol of eternity--something with no beginning and no end, no direction and no break.  It encompasses all space and time.  Some of the first ornamental rings mimicked a serpent eating its tail.  The consumption and rebirth of the figure was felt to represent the cyclical nature of life.

A ring could give the wearer various strengths--from invisibility to immortality.  Magical rings are part of several cultures--Odin wore an arm ring that regenerated itself.  King Solomon had a ring that gave him power over demons and animals.  Literature also celebrates the mystique of the ring.  Merlin was the victim of a ring that carried a love spell.  And who can forget the bauble that put Middle Earth back on the map, J.R.R. Tolkein’s The One Ring.
The first rings were documented in ancient Egyptian hieroglyphs and probably evolved from the use of official seals, i.e. signet rings.  In other parts of the ancient world, rings were worn by Celtic tribes and fashioned of iron or stone.  In their myths, it was believed that rings anchored the soul in the body and prevented demons from entering.
The Greeks and Romans initially shared this not-so-romantic view of the ring.  Although they were given during marriage, in most cases they symbolized the groom’s financial commitment to the bride--and the bride's duty and subservience to the groom.  The ring was simply a symbol of being bound and was probably connected to the story of Prometheus.  Prometheus, of foie gras fame, was forced to wear a link of his chain as a ring to serve as a reminder of being bound to the rock and “owing” the Gods.

Later in the Roman Empire, rings were used to designate social classes.  It is not until the 2nd century that the Roman comedic poet Plautus finally documents the ring as a symbol of love.  Unfortunately, Hannibal misses the romance memo and uses his ring to poison himself to escape capture by the Romans after the second Punic War.
Christians started using plain gold rings in their wedding ceremonies in the 8th century, which was around the time clerical rings were appearing as well.  Diamonds did not become a girl’s best friend until 1477, when Emperor Maximillian I gave the first known diamond engagement ring to Mary of Burgundy.  Interestingly, rings for husbands didn’t gain popularity until post-WWII when marketing efforts placed value on celebrating marriage.  Only 15% of pre-Depression era marriages were a double ring ceremony.
In the past, the placement of the ring was probably more important than its appearance.
The issue of left versus right hand was derived from ancient Egyptians’ belief that a vein ran from the ring finger of the left hand straight to the heart--the vena amoris. However, in some places in the Ukraine and Germany, the right hand is the proper hand for a marriage ring--they were a little less creative about the anatomy of the human body than the Egyptians.  In symbolic terms, the left hand is often viewed as the receptive hand--it receives energy and gathers information in a subconscious fashion.  The right hand is the active hand--it gives energy and is a symbol of awareness.  Depending on what the wearer desires to achieve with their ring, either hand may be appropriate.
During the Renaissance, a person might wear a ring to announce their occupation or place in life.  Thumb was for medical practioners, index was a merchant or salesman, middle was for a fool (I’m thinking not too many middle finger ring wearers back then), third was for the student, and the pinky was for lovers.
Because of its roots in pagan and ornamental usage, some Puritans believed that wedding rings should be forbidden, citing Biblical admonitions against wearing gold or pearls or costly attire.  In an effort to make the ring seem a bit more Christian, The Book of Common Prayer in the 1500s declared that the thumb, index and middle finger represented the Father, Son, and Holy Ghost.  The next finger was designated okay for use by humanity.
For those unhitched, each finger can symbolize and/or help emphasize certain qualities.  The thumb represents self-assertion and power of will.  The index finger, or the Jupiter finger, represents leadership abilities, ambition, and self confidence.  Saturn is the middle finger and channels a person’s sense of law and justice.  It forces introspection and self analysis.  Apollo is the ring finger and represents love of beauty, creativity and expression of self.  The little finger is Mercury, and speaks of intuition and communication, especially if used in manipulation.  Now I understand the roots behind the mafioso pinky ring.
Some of my favorite rings have nothing to do with precious metals.  Since I have mad love for anything paranormal, the ring of salt as popularized by Supernatural is always a good one. 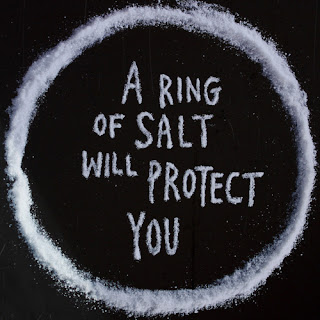 I’m also a fan of fairy rings.
And onion rings. 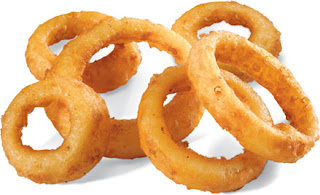 And salt rings of all kinds. 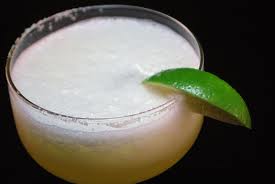 So after all of this, is there magic in a ring?  I think after nine years I can honestly say . . . yes.

Posted by julie fedderson at 12:55 AM